Beards for Kids/Shop with a Cop 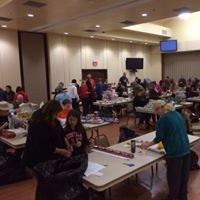 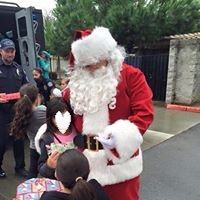 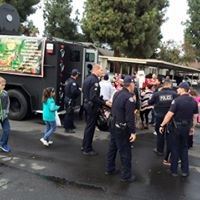 The History of Beards for Kids

It started around September of 2013 at a local gas station in Ceres, CA. The Officers called it “Ron South”. It was really a combination 7Eleven/Chevron on the south side of town where a group of night shift Officers would meet nightly, once the “board was clear” (No pending calls for service) They would meet for about 10-15 minutes and chat over coffee, thinking up ways to solve the world’s problems.

October’s Cancer Awareness month was just a few weeks away and the Firefighters were selling pink shirts. Football players would be wearing pink and the Officers were trying to figure out a way to get involved.

“No Shave November” was around the corner and Officer Jeremy Caron said, “There has got to be a way to get Admin to let us grow beards.” Officers Greg Yotsuya and Julio Amador, who rounded out the group, thought “No way.” A brain storming session took place with Officer Caron finally saying, “It won’t hurt to ask.”

A few weeks later, these same Officers were on dayshift. Officer Caron had approached the Deputy Chief, Michael Borges, with the idea and D.C. Borges’ response was “You find a good enough cause and I will consider it.”

Officer Caron brought back the news to his shift partners. “Christmas is around the corner.” someone in the group said. “How about we do a toy drive?” and Beards for Kids” was born. The group sought out Officer Jason Coley, who worked in the Traffic Division.  In addition to his impressive mustache, Officer Coley is known for his ability to get things done and author a good memorandum.

The impressive memo outlined the request for sworn and civilian staff to grow beards during the month of December. Officers would grow beards to bring awareness to underprivileged children in the Ceres Community and would also conduct a toy drive to collect toys to deliver to the aforementioned children.

The memo was taken to a staff meeting where it was shot down by the group of Sergeants and Lieutenants. Their reasons? They believed it to be an insincere attempt by Patrol Officers to grow beards. When Chief Art De Werk heard of the idea and spoke with Officer Caron and others, he vetoed the denial by staff and allowed the program to take place.

Once word got back that the idea was approved, Officers began scrambling. Officers Caron, Yotsuya, Amador, Coley and Griebel began talking and planning. The decision was made to gather names of families in need from various sources. These families came from suggestions from the Ceres Unified School District, the Ceres Partnership, as well as from Officers' firsthand experience with families while on calls for service. Word was also put out through the local city newspaper and the department's social media outlets, giving Officer Coley’s work number to call if you were a family in need.

A collection bin marked “Ceres Police Beards for Kids” was placed in the lobby of the Ceres Police Department and the Ceres Community Center. Officers began spreading the word about the toy drive.

The plan was to choose ten families to help. Toys collected would be delivered to these families by uniformed Ceres Police Officers and Santa Claus would ride in the Lenco (SWAT) armored vehicle that was full of the toys. In order for the toys to be wrapped, a “wrapping party” was planned to take place the morning of the delivery. Employees of the Ceres Police Department and their families and friends would take part in wrapping the gifts.

The toy bins and announcements were distributed the day after Thanksgiving and the Officers began to grow beards. Within a few days, the bins were full. Another bin was added at a local Dollar General store. These bins were filled over and over within the next few weeks. Several hundred toys, more than what was really needed for the ten families, had been collected.

The “Beards for Kids Committee”, which is what they were now being called, got together. The decision was made to go through the toys, pick out what was needed for the chosen families and sort the rest by gender and age group. These “left over” toys would be distributed throughout the community as they made deliveries to the ten families.

The morning of delivery day came. The toys had been sorted and approximately 20 people showed up to begin the task of wrapping several hundred toys. The toys for the families were wrapped first with the names of the recipients being placed on each present wrapped. The toys were then placed in large plastic bags to keep them separated and safe.

The rest of the toys were wrapped and placed in large plastic bags labeled with the gender and age group for the toys. The route to each family’s house was planned and the group set off. Lights and sirens on the Lenco and escort patrol cars would be activated as they pulled up to the house.

At each stop, Santa would load his bag (made by an officer’s mother) with the family’s gifts. Escorted by Officers, Santa would walk up to the house and hand out gifts. The appreciation on most of the family’s faces was apparent. One family even presented handmade ornaments to the delivery Officers.

Once deliveries were made to the ten families, the delivery Officers went into the high density housing areas of the city with red and blue lights shining and sirens blaring. As they entered the various complexes an announcement was made over the P.A. “Merry Christmas, Children! Santa is here and he has a present for you! Come see Santa!”

Slowly, children came out of their homes and ran towards Santa as he and his escort Officers handed out the presents. Smiles were contagious and adults would ask “What is this?” Bearded Officers would answer “It’s Christmas time! Merry Christmas!”

Something special happened during this time. These Officers, some of them hardened over years of working in the field, were beaming with pride. Citizens, some of which were used to fearing the sight of the lights and scream of the siren, were smiling. Some had tears as their child received a gift. Handshakes, hugs and compliments were everywhere.

When it was all over and the last present handed out, the Officers headed back to the station. Every one of them realized that they had just experienced something amazing. Something that started as a simple reason to grow a beard had become so much more.

A lot of mistakes were made in that first year. The support of the community was underestimated and we were unprepared for the amount of toys that would be donated, which made storage an issue.

It was decided that choosing the families was something that the Officers should not be involved in. Out of the families that were involved that first year, one lived outside of the city. One lived in a very large, newer home, which had been fully decorated for Christmas to include a tree with several presents under it. One family didn’t want the Officers coming to their house. Instead, the mother came to the Police Department to pick up the toys. She showed up in a brand new Lexus SUV. She left with the toys, without so much as a “Thank you”.

Many people and businesses wanted to help with the program but didn’t have the time to buy toys. Instead they wanted to make monetary donations. Involving the Ceres Police Officers Association, a non-profit organization, and having their members organize and run the program would be necessary to accept these donations.

Many bicycles had been donated to the program. So many that we had some left over after taking care of the original ten families. It was realized that one cannot take three or four bicycles to a high density area and hand them out. Why? How do you choose which child out of the group of 30 or so kids that have gathered around you, gets a bike?

The Evolution of Beards for Kids

The original Beards for Kids Committee, Officers Caron, Yotsuya, Coley, Amador and Griebel, realized that Beards for Kids could grow and become something much larger then what they had witnessed that first year. Planning for the next year began to take place and a “Shop with a Cop” event for five families was added. Corporate sponsorship from Wal-Mart was obtained to help fund this with Social Media as well as conventional media used to advertise the program.

Since that first year, the Beard for Kids program has evolved and grown into something much bigger than a simple toy drive. The community has come together in the true spirit of the season. It is the hope of the original Beards for Kids committee that the program reaches the point that it becomes a community event that is simply facilitated by the Ceres Police Department and Ceres Police Officers Association.

The Beards for Kids program continues to grow. Now in it’s fifth year, the Shop with a Cop component has grown from five to fifteen families. Food baskets have been added to the program. It is estimated that the program is reaching hundreds of families in the city of Ceres, ensuring that the children of our community enjoy a Merry Christmas.